I will be viewing blade runner in the very near future for the very first time in my existence. 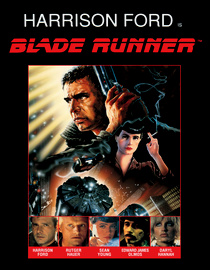 haven't seen that one.
I don't even think I've seen the "director's cut"
mine was chock full of unnecessary voice-over narration.

i've got some wierd set, that apparently has every version ever made.
what's funny is it's on that obsolete 'high def' dvd.

Much less embarrassing without the narration (Director's Cut version)

Also isn't the ending different in the original release? As in, a happy ending as opposed to the book.

Kinda like tears in rain, if you ask me.
'the fuck did I do?
Top

God, I saw it like fifteen years ago
I don't even remember the ending.

I've only ever seen the Director's and Final Cuts.

Bought the latter on blu-ray, have no idea what the film would be like with "narration". Still love it and the soundtrack.

It's alright. Some nice imagery. Japanese cities. Sean Young being a babe.
Hardly the masterpiece people make it out to be, and not much to do with the novel or Philip K Dick.
And before you ask, no he's not a replicunt.
Top

I believe the theory behind this future vision is that the Asian economies more or less dominate the world, so America looks more like Tokyo, or Chinatown in LA has expanded to absorb most of the city, while pollution has driven most of the richer/healthier population emigrates to off-world colonies.

I do remember you saying you did not like the soundtrack a while ago, I guess the film didn't leave as strong an impression on you mate. I fucking love it.