$24. They've got a $2 postage special on at the moment as well.
by Dress Barn
I used to love Moore's Swamp Thing, but I haven't reread it in 17 years
I used to like Killing Joke but I don't think I'd dig it now
I didn't like V For Vendetta at all
From Hell is awesome
Watchman is awesome- except for that Pirate story
by judasmuppet
I only recently got around to reading Moore's Swamp Thing, and it's pretty awesome.
by Don Eduardo
League of Extraordinary Gentlemen has been on my list for a long time. I think I'll finally dip in when the new volume comes out.
by judasmuppet
Read any Astro City?
by Don Eduardo
No. But I want to. Busiek's current run on Superman is meant to be pretty good.
by The Rambam
Anyone here ever read Rising Stars? I'm thinking of checking that out, sounds promising.
by judasmuppet
Been thinking about it. Nearly picked up a book from the library today.
I might grab it after I've churned through a bit more that they've got that's on my list.

I've heard mixed reviews about his stuff outside of Astro City, but the general consensus is that Astro City is good stuff.
by Thunder Bear
I like everything from Sin City to Bone, Carl Barks' Donald Duck (got the fifth book in the series today

I used to read lots of Marvel, and some DC when I was younger. The Incredible Hulk was my favorite. Ive also been a big fan of Andre Franquins work (Gaston Lagaffe, Spirou), Tintin, Lucky Luke and Asterix, for as long as I can remember.
As I type this, I so badly want to go visit my parents, and read old comics all day.


These days Im getting incredible kicks from this guy called Jason. Heres a couple of random samples: 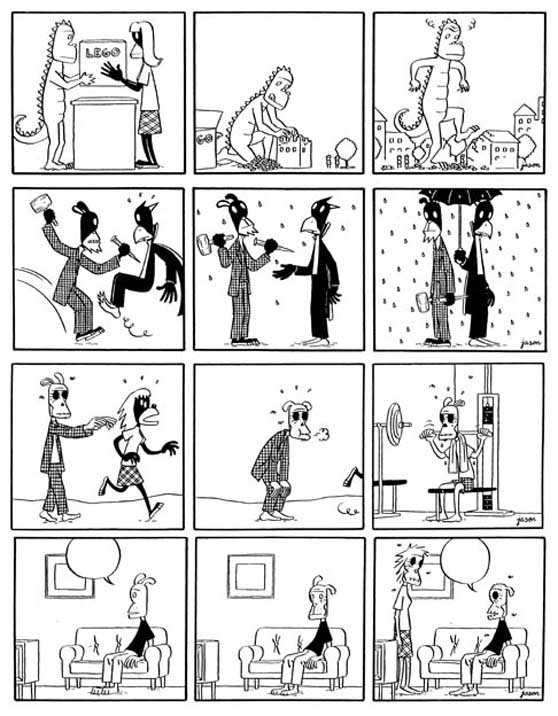 His graphic novels are highly recommended!


Next on my agenda is Watchmen.
by Dress Barn

and some other stuff from

I bougth this 16 years ago:

by judasmuppet
An important cause:

http://www.thepoint.com/campaigns/its-a ... man-hoodie
by Don Eduardo
I'll probably pass on the chance to walk around with a jumper sporting printed-on pectoral muscles, thanks.
by judasmuppet
So that's a maybe?
by Dress Barn

Just reread this, this morning.

I think it's one of my favorite books ever
by judasmuppet
I read a torrent of the first issue. I'm hoping the hardcover version of the book will magically appear in my possession in the next few weeks.
by Karp
I moved to a place with a sweet comic shop a little over a mile away from my house. Ive been reading this one series called The MAXX from the early 90's. Im getting more into Hellboy and Deadpool as well
by not jimmy
maxx is awesome
get the movie if you can
by judasmuppet
I haven't seen the animated stuff, but I used to love Maxx. I think it's mostly Sam Keith that I really dug. His stuff on Sandman was awesome.
All times are UTC-05:00
Page 2 of 2